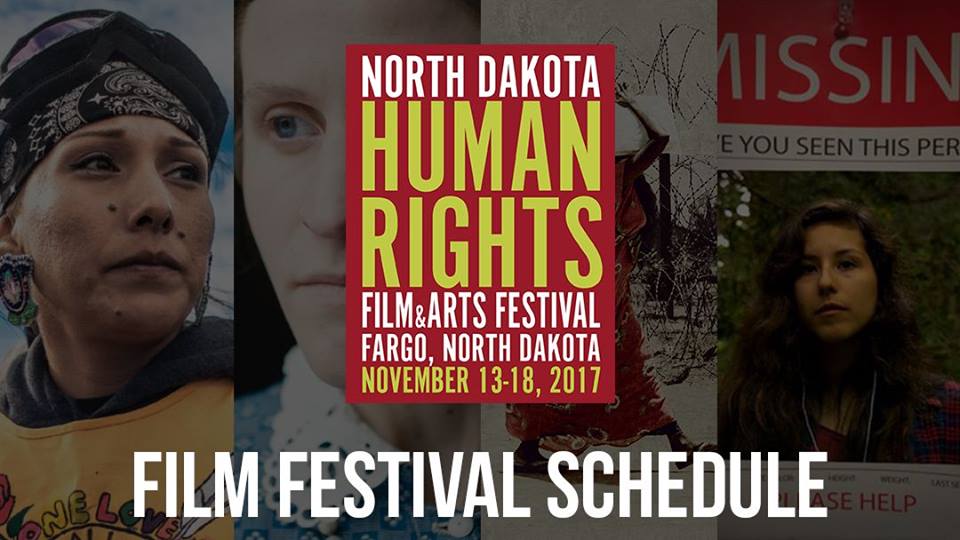 FARGO, N.D. (October 19, 2017) – The North Dakota Human Rights Film Festival is proud to announce the list of human rights and social justice films scheduled to screen at the first annual festival. 22 films from 8 countries will screen at the historic downtown theater in Fargo,North Dakota Wednesday, November 15 to Friday, November 17. The full schedule can be viewed online. Doors open at 6:30, and screenings begin at 7 p.m. each evening.

The feature night films for the festival include: The feature length documentary Oscar Arias: Without a Shot Fired (Costa Rica / Wednesday, Nov. 15), the story of a tiny country that made a decision to do something that no other country had ever done — to abolish its army and declare peace to the world; Warehoused: The Forgotten Refugees of Dabaab (United States / Thursday, Nov. 16), which explores the plight of long-term refugees through a glimpse into the lives of those living in Dadaab, Kenya, one of the world’s largest refugee camps; and Awake: A Dream from Standing Rock (United States / Friday, Nov. 17), which follows the Standing Rock Sioux Tribe in North Dakota as they captured the world’s attention through their peaceful resistance against the U.S. government’s plan to construct an oil pipeline through their land.

In addition to high quality films produced by filmmakers in North Dakota and elsewhere in the United States, films from filmmakers in Brazil, Canada, Costa Rica, France, Iran, Italy, and the UAE will be screened. Selected films screening at the festival are currently under Jury review to receive awards, including, a “Best of Show” award, featuring the original artwork by local metal worker Karman Rheault.

Panel discussions will take place each evening. On Wednesday, Representative Joshua Boschee will moderate a panel discussion with local governmental and non-profit organizations about how to access your human rights in North Dakota and Minnesota. On Thursday, Darci Asche of the New American Consortium for Wellness and Empowerment will moderate a panel discussion about the local refugee experience. The panel discussion will include Asher Emmanuel, co-director of the film Warehoused: The Forgotten Refugees of Dabaab. The festival will end on Friday evening with Floris White Bull, advisor and co-writer of Awake: A Dream from Standing Rock, and other water protectors reflecting on their experiences a year ago at Standing Rock, and sharing their thoughts on how communities can address oppression, injustice and climate change in North Dakota and beyond.

118 films from 28 different countries were submitted for consideration to the festival, totaling over 76 hours of content. Jurist from Bismarck, Grand Forks, Fargo and Moorhead reviewed each film, and selected the top films for screening. The Jury panels included human rights champions, filmmakers, professors and educators, and members of the general viewing audience.

The North Dakota Human Rights Film and Arts Festival will take place Nov. 13-18, 2017, in Fargo, North Dakota. The art exhibition will open on Monday, Nov. 13, at the Spirit Room in downtown Fargo. The exhibition will be available for viewing through Jan. 5, 2018. The film festival will screen at the Fargo Theater Nov. 15-17, 2017.

The mission of the North Dakota Human Rights Film and Arts Festival is to educate, engage and facilitate discussion around local and worldwide human rights topics through the work of filmmakers and artists. 2017 is the inaugural year for both the film and art festivals. The festival was founded and is managed by the non-profit The Human Family, an organization dedicated to promoting human rights and social justice through film and art. Support for the festival comes from the Fargo Human Relations Commission, the Fargo Native American Commission, Lutheran Social Services of North Dakota, Kensie Wallner Photography, Moorhead Massage and Wellness, the North Dakota Human Rights Coalition, and Park Co. Reality.

Click her for a PDF version of this press release.