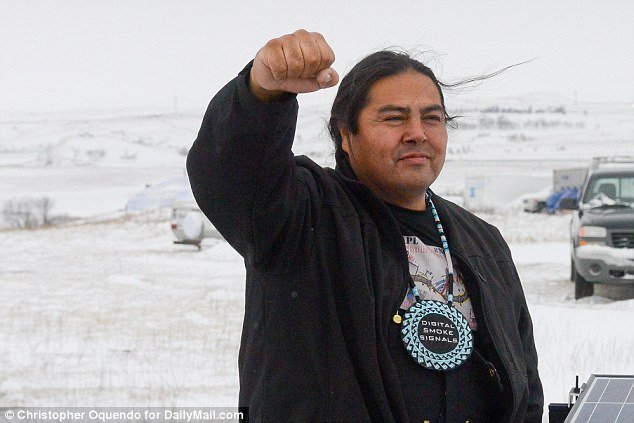 Activist, filmmaker, and educator Myron Dewey will join the North Dakota Human Rights Film and Arts Festival on Friday, November 17 and participate in the panel discussion, “Reflections of Standing Rock”. The panel will take place after a screening of his film, “Awake: A Dream from Standing Rock“.

Myron Dewey’s drone footage made him one of the most important journalistic voices to come out of the Standing Rock movement. Founder and owner of Digital Smoke Signals, Dewey is Newe-Numah/ Paiute-Shoshone from the Walker River Paiute Tribe, Agui Diccutta Band (Trout Eaters) and Temoke Shoshone. He is a professor, filmmaker/editor, digital storyteller, historical trauma trainer, drone operator and journalist. Digital Smoke Signal’s goal is to help bridge the digital divide throughout Indian Country and indigenize media through indigenous eyes with cultural core values (Culture, Reciprocity, Respect and Family).

The panel discussion, “Reflections of Standing Rock” will invite filmmakers and water-protectors to reflect a year out from the peaceful resistance to the Dakota Access Pipeline. Panelist will share their experiences, as well as their thoughts on how communities can address oppression, injustice and climate change in North Dakota and beyond.

The mission of the North Dakota Human Rights Film and Arts Festival is to educate, engage, and facilitate discussion around local and world-wide human rights topics through the work of filmmakers and artist. 2017 is the inaugural year for both festivals.

The North Dakota Human Rights Arts Festival will be exhibited November 13, 2017 through January 5, 2018 at the Spirit Room in Fargo, North Dakota.A public reception and awards ceremony will be held at The Spirit Room on Saturday, November 18 from 5 to 7.

Learn more about Myron Dewey and his work at his website.