Fargo, N.D. (September 3, 2020) – The Fargo-Moorhead LGBT Film Festival Jury is proud to announce the award winners for the 12th annual film festival. Seven films are being recognized and honored for their creativity, talent, approach to content and overall excellence of their films. “We’re excited to recognize these filmmakers and their work,” said Sean Coffman, Executive Director of the Human Family and Chair of the 2020 Fargo-Moorhead LGBT Film Festival.

“March for Dignity” follows a small group of LGBTI+ activists in Tbilisi, Georgia as they attempt to conduct the first Pride march in the country, They face overwhelming opposition from far-right groups, the government, and the Georgian Orthodox Church, which has led to a history of attacks on the LGBTI+ community, often inciting rallies of thousands of violent counter protestors. With membership of the European Union, and anti-Russian sentiment firmly on the political agenda, Georgians are at a turning point in history where they must choose to fight for progress and human rights, or concede to greater Russian influence. In the midst of this geopolitical turmoil, the committed organisers of Tbilisi Pride bravely strive to be visible in their evolving country.

Drag sensation Lady Galore is about to undergo her biggest transformation yet. Fighting for visibility and solidarity, she has become vital to the European drag community. For Sander den Baas, the man behind Lady Galore, this devotion is starting to take its toll.

Although his size is what makes Lady Galore stand out and brought her fame, Sander is struggling with more and more health problems. Gastric bypass surgery will help him regain a healthy weight. But what will remain of Lady Galore?

Stand Up, Stand Out: The Making of a Comedy Movement
Directed by David Pavlosky

“Stand Up, Stand Out: The Making of a Comedy Movement” tells the story of a unique brand of activism belonging only to San Francisco–where three gay teachers’ fight for equal rights during the burgeoning Gay Liberation Movement of the 1970s, led to the blossoming of the Valencia Rose Cabaret, Café, and Restaurant, believed to be the first and only gay-owned and operated comedy club in the USA. As AIDS ravaged San Francisco, a gay and lesbian comedy club flourished in, of all places, an old mortuary.

From 1981 to 1986, the Valencia Rose Cabaret, Café, and Restaurant blossomed as the home of queer comedy, the birthplace of many well-known careers, a de-facto community center and a gathering place for activists. At a dark historical moment, it was a locus of resistance through laughter. Stand Up, Stand Out is a thirty-five minute documentary that plunges into a little-known, but widely resonant, chapter of queer cultural history: the story of the Valencia Rose (1981-1986).

Through the voices and humor of the Rose’s performers, the film explores gay comedy as an outgrowth of the rich traditions of activism and performance in San Francisco, an empowering response to the conservative politics of the era, and a valiant quest for joy and laughter amidst the horrific onslaught of the AIDS crisis.

Andri, an anxious teenage boy, hides and represses his sexuality in fear of his masculine father’s reaction but, on the eve of Andri’s first date, he finds a clever way to reveal his secret.

Birds of a Feather
Directed by Varad Bhamburdekar

In the courtyard of an Indian Palace a male peacock named Kana fails to get his feathers up for a female named Ami until he meets another peacock named Madan with the same problem.

They both finally bloom to reveal their feathers and their attraction for each other as the film closes with a Bollywood dance sequence as the peacocks celebrate their new found love.

The beginning quotes the story of Change Chou’s dream butterfly. Our fantasy of love is whether we only come from the model that we want the other person to be the projection of our own inner desire.

There is an impractical illusion and whether love itself is like a cloud of smoke, when a gust of wind comes, clouds and fog spread out, everything seems to have never existed, clouds and fog itself is a state without entities, whether it is like a state of love, and this state is visible but not touchable.

A four-part voguing odyssey with the father of the House of Milan, Benjamin Milan featuring original music by Gaika.

Swedish choreographer and movement director Benjamin Milan leads this visual ode on the transformative power of dance. “This film is about my journey in the ballroom scene,” says Milan. “This is about how voguing helped me accept myself and find a community that welcomed and understood me for who I am.”

As father of the House of Mila in the UK, the dancer highlights the importance for LGBTQ+ groups, people of color and other marginalized communities to not just find a scene, but a home. Featuring rapturous music from long-term Nowness contributor Gaika, New Ways is Milan’s personal odyssey, which he choreographed and conceived with director Jonas Hegi.

The mission of the Fargo-Moorhead LGBT Film Festival is to bring relevant and current queer cinema that highlights the lived experiences of the LGBTQ+ community to the northern communities of Fargo, North Dakota, and Moorhead, Minnesota.

For more information about the festival, visit www.fmlgbtff.org. 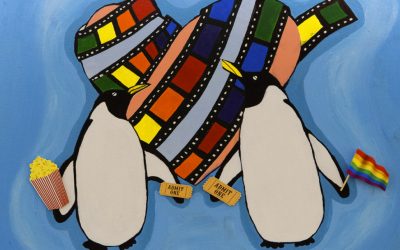 The Fargo-Moorhead Film Festival is proud to share the offical poster for our 12th anniversary season. Fargo-based artist Anna Johnson of Flying 7's Fine Art has hand-crafted a collage to celebrate twelve years of celebrating the lived experience of the Lesbian / Gay... 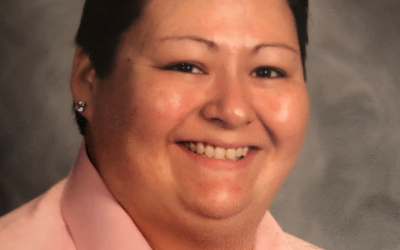 Fargo, North Dakota based artist Anna Johnson has been commissioned to create the branding for the 12th Annual Fargo-Moorhead LGBT Film Festival. Johnson is a prominent Two-Spirit artist who regularly produces artwork relevant to human rights and social justice. Her... 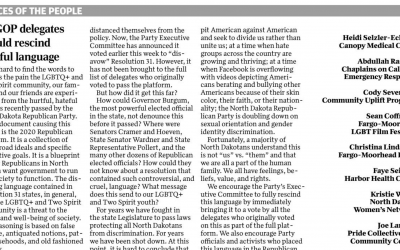 The Fargo-Moorhead LGBT Film Festival stands in solidarity with LGBTQ and allied organizations across the state in condemning the hateful language of the North Dakota Republican Party's 2020 platform.   Letter to the Editor Sunday, August 2, 2020   It is...