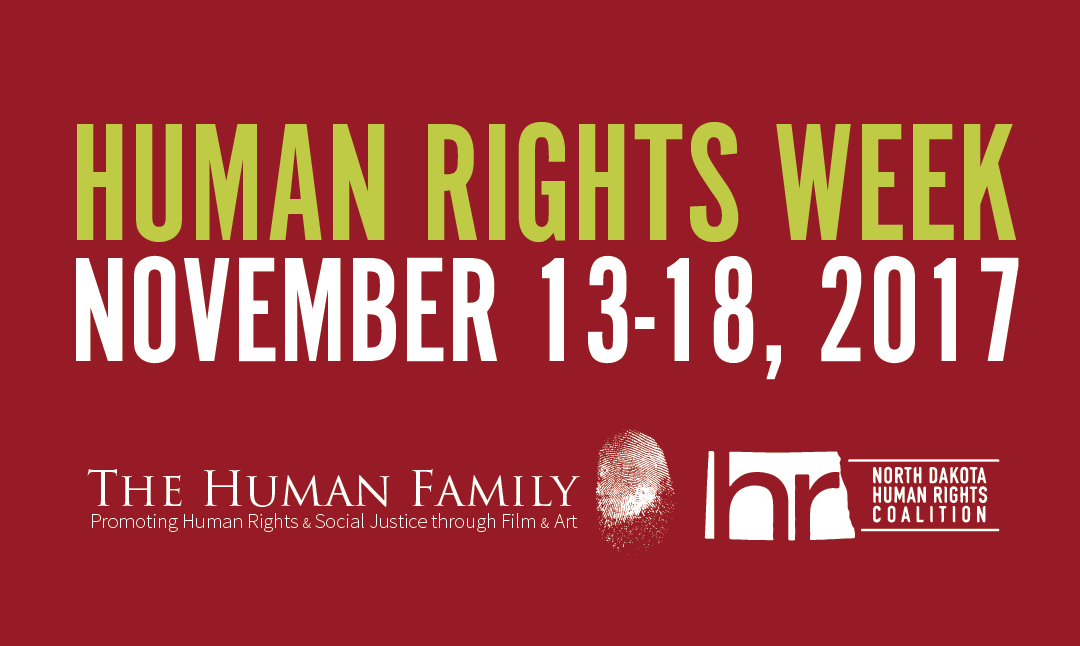 Human Rights week will begin Monday and Tuesday at The Spirit Room in Downtown Fargo with the opening of the first annual North Dakota Human Rights Film & Arts Festival. The Spirit Room is host to the festival’s art exhibition, which will include human rights and social justice themed work from North Dakota’s top 2D and 3D artist, including: wet-plate collodion artist Shane Balkowitsch, water colorist Ellen Jean Deiderich, and multi-media artist and FMVA Board Vice President Karen Perry Anderson. The exhibit is free to the public, and open daily 1 to 5 p.m.

The week continues on Wednesday, November 15 at the Fargo Theatre with the opening of the North Dakota Human Rights Film Festival. Rev. Grace Murry of the newly formed People’s United Church of Christ will open the film festival with an invocation, and will be followed by a diverse grouping of short narrative, short documentary and student films that deconstruct the stereotypes of individuals with mental or physical disabilities, share stories of LGBTQ rights and discrimination, and focus on women’s rights and cultural discrimination. The feature length documentary Oscar Arias: Without a Shot Fired, directed by Dawn Engle, shares the story of a tiny country that made a decision to do something that no other country had ever done: to abolish its army and declare peace to the world. The film will be followed by a panel discussion moderated by North Dakota State Representative Joshua Boschee titled, “How to Access Your Human Rights in North Dakota and Minnesota”. State and local non-profit and governmental organizations will be on hand to speak about the work they do, the protections they offer, and identify how citizens can access those services if they feel their human rights have been violated. Organizations scheduled to participate on the panel include: The City of Fargo’s Human Relations Commission, High Plains Fair Housing Center, the North Dakota Chapter of the ACLU, and the North Dakota Human Rights Coalition.

The second night of the film festival takes place on Thursday, November 16, with films focusing on the New American and Refugee experience. The feature length documentary Warehoused: The Forgotten Refugees of Dabaab explores the plight of long-term refugees through a glimpse into the lives of those living in Dadaab, Kenya, one of the world’s largest refugee camps. The film’s co-director and editor, Asher Emmanuel, will be at the festival to participate in a panel discussion following the film’s screening. The discussion, titled “The Refugee Experience” moderated by Darci Asche of the New American Consortium for Wellness and Empowerment, will also include individuals from Willmar Senior High School from Willmar, Minnesota, who were featured in the film. Former refugees who are now highly regarded members of the Fargo-Moorhead community Hukun Abdullahi, Executive Director at the Afro American Development Association, and Laetitia Mizero Hellerud of UBUNTU Consulting, will also participate on the panel to share their own experiences about their journey to Fargo-Moorhead.

The film festival concludes on Friday, November 17, with a series of films focusing on the Native American Experience beginning with a short narrative titled, Missing Indigenous, a silent short explores the subject of missing indigenous women. The conversation transitions to a number of films providing a variety of perspectives to the peaceful resistance to the Dakota Access Pipeline at Standing Rock. The line-up includes the work of Bismarck filmmakers Justin Deegen, James Kambeitz, Karen Van Fossan, and Samual Sprynczynatyk. The feature film Awake: A Dream from Standing Rock will screen as the festival’s closing film, and will be followed by the panel discussion “Reflections of Standing Rock” which will feature the film’s co-director Myron Dewey, and the film’s advisor and co-writer Floris White Bull. Other members of the panel scheduled to participate include Layha Spoonhunter, one of the founding members of the International Indigenous Youth Council, and Margaret Landin, narrator of the film Peacekeeper, which is also part of the screening schedule.

On Saturday, November 18, the annual Human Rights Summit and Arc of Justice Awards organized by the North Dakota Human Rights Coalition will take place at Dakota Medical Foundation. Beginning at 8:30 a.m., the Summit will include performances by the Gay Men’s Chorus, an overview of the human rights violations that have taken place over the past year in North Dakota as well as a review of the 2017 Legislative Session. The keynote speaker for the Summit will be Victoria McWane. Her presentation, “Fearlessly Engaging in Respectful Conversation” will help set the path of North Dakota communities to engage and help facilitate change in our neighborhoods and cities one individual at a time.

During the Summit, individuals and organizations will also be recognized through the Arc of Justice Awards Ceremony. The award recognizes people or organizations doing significant work to improve human rights in North Dakota. The Summit concludes at 3:30 p.m.

Human Rights Week ends Saturday evening with the North Dakota Human Rights Festival Art Reception and Awards Ceremony, taking place 5 to 7 p.m. at the Spirit Room. Individuals are invited to review the exhibition, network, and take part in discussions with artist as they share their motivations for their work. Filmmakers and artist will be recognized for their work during the awards ceremony, and two individuals will receive a “Best of Show” award that features the work of local metal worker Karman Rheault. Artist talks begin at 5:30, and the awards ceremony begins at 6:00. Beverages and food will be available.

Tickets for Human Rights Week are now on sale at www.ndhrff.org or via Facebook. The Human Rights Week All Access Pass provides admittance to all three nights of films, the Human Rights Summit and Arc of Justice Awards, and the art reception and awards ceremony for the discounted rate of $55. Individual event tickets are also available, ranging in price from $35 – $10.

To join the conversation, individuals are encouraged to go to the festivities in person and through their social media channels using #NDHFF17 and #NDHRWeek17.

“Our goal is to engage awareness and facilitate discussion,” said Sean Coffman, Executive Director of the Human Family. “We’re speaking to issues that are above politics, above religion, race or creed. It’s important that as a community we’re actively engaged in these human rights and social justice topics.”

“There has not been a more important time in modern history to come together in defense of human rights,” said Barry Nelson, Community Organizer for the North Dakota Human Rights Coalition. “Justice minded people cannot despair, we need to come together in mutual support, purpose clarity and organize on behalf of all our brothers and sisters. The Week of Human Rights is not the only way to do this, but it is an important and critical step.”

The mission of the North Dakota Human Rights Film and Arts Festival is to educate, engage and facilitate discussion around local and worldwide human rights topics through the work of filmmakers and artists. 2017 is the inaugural year for both the film and art festivals. Support for the festival comes from African Soul, American Heart, Bell Bank, the Fargo Human Relations Commission, the Fargo Native American Commission, The Front Street Taproom, Lutheran Social Services of North Dakota, Kensie Wallner Photography, Moorhead Massage and Wellness, the North Dakota Human Rights Coalition, and Park Co. Reality.