By Oscar De Leon. This story was originally printed on The Skrive on November 15, 2018. The original story can be found online here.

NDHRFF is funded by The Human Family, a Fargo-based nonprofit collective of humanitarians, philanthropists and artists. Long-time filmmaker from Fargo, Sean Coffman, organizes the curation of the festival.

Like many Human Family members, Coffman’s mission is to promote human rights and social justice through film and art.

“We created The Human Family in March of 2017. It’s the culmination of several human rights projects that we were doing for North Dakota,” Coffman says.

In fact, the film festival is just one of several ways The Human Family is trying to bring awareness to larger regional issues. During fall of 2017, the inaugural film festival was held at the Fargo Theatre. It highlighted films that explored various human rights issues including the fight to protect clean water from the Dakota Access Pipeline.

This year, the festival has been expanded to two more cities –Bismarck and Grand Forks – and added afternoon screenings films in all three locations. Each location features films exhibiting current issues in their respective cities and surrounding areas.

During the selection process, the NDHRFF received a total of 146 film submission from across the globe. All the films varied greatly in genre, length, and subject matter. The decision to finely craft the selections to fit the regional themes led to the addition of afternoon showings for every city.

“We had a volunteer jury of 15 people from all over North Dakota that had to sit and watch through 86 hours of film. They graded the films on technical quality as well as content,” Coffman says. “In some cases we have films with million dollar budgets but they don’t have a lot of heart, whereas we might have a small budget film that really cuts through the message”. 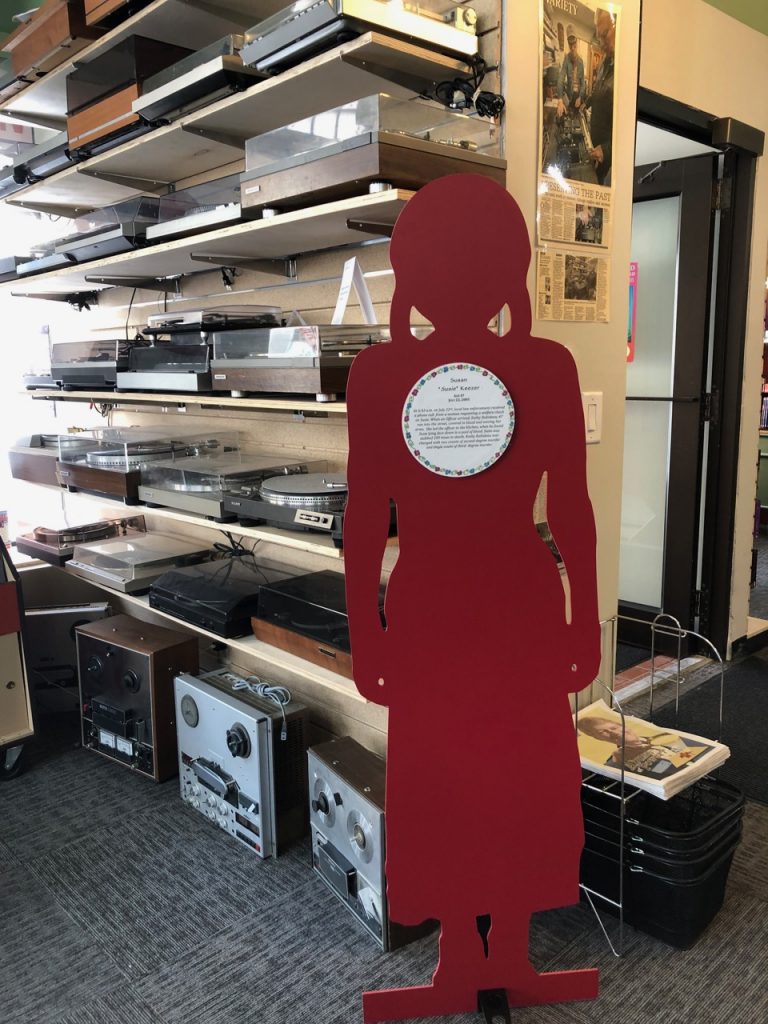 In tandem with the festival – an art installation called The Silent Witness Project features 15 life-sized silhouettes in the shape of Native American women and children. The experiential exhibit is dispersed throughout various shops in Downtown Fargo including Atomic Coffee, Zanbroz and The HoDo.

The Silent Witness Project coincides with the Missing and Murdered Indigenous Women movement that brings attention to the abuses Indigenous women have endured, and continue to endure, with little to no exposure from mainstream media. 4 of 5 Indigenous women are affected by violence in America.

Sonya Jensen, another member of The Human Family, works diligently to bring these issues to light.

“I was shocked by the facts and the figures about the crisis surrounding Indigenous women and the suffering they have endured,” says Jenson.

To further highlight this issue, the Human Family will bring all 15 silhouettes to be displayed at the Fargo theatre for all patrons to experience during tomorrow night only.

The festival concludes with the premiere of “1200+” a documentary feature film about a region in Canada where the Indigenous community has experienced an influx of murder and violence victims. It’s a stirring and chilling documentary told from the perspective of journalist Sheila North – the former Grand Chief of Manitoba Keewatinowi Okimakanak -and filmmaker Leonard Yakir.

After all the films have been showcased, the filmmakers of “1200+” and Lisa Brunner, member of the White Earth Ojibwe Nation will hold a panel discussion.

During the Fargo evening showings, the featured films will highlight homelessness, a key issue The Human Family has researched.

Jenson’s experience as a volunteer at the Gladys Ray Homeless Shelter illustrated the dire issues the area homeless face, especially during winter.

According to a recent study from Housing and Urban Development, homelessness has gone up 18 percent across North Dakota in 2017 alone. Fargo has an estimated homeless population of 446 people. Compared to its population of roughly 123,000 people, this statistic seems relatively low but still translates to nearly 500 individuals having to find a place to survive in the winter. Earlier this year a man died due to exposure of elements in the dead of winter.

“There are families with children that sleep in their cars,” says Jensen. “It was an eye opening experience learning that as a volunteer and from there I knew I had to do something about it.”

Motivated by wanting to create something positive and illustrative, she spearheaded a documentary series called “Home” which centers around the crisis and will be showcased at the festival Thursday night.

In addition, a short film from Denmark entitled “A Man Falls from The Sky” will be shown on Friday night. The clever and witty film which centers on a man falling from the sky and the paranoia that follows it. It’s a clever and witty short film that explores xenophobia in an unsuspecting way that is worth unraveling and experiencing by watching the film.

It’s in experiencing these types of films that Coffman hopes will create open dialogue among the viewing public.

“If people aren’t familiar with the subjects we are talking about at the festival, our hope is that they walk out of the festival with a better understanding of what the human rights issue is,” says Coffman. “ And potentially, learn how they can be an advocate for solution for the crisis.”

Where: The Fargo Theatre

Tickets: At the Fargo theatre or online at: https://human-family.networkforgood.com/events/7247-the-north-dakota-human-rights-film-festival-fargo